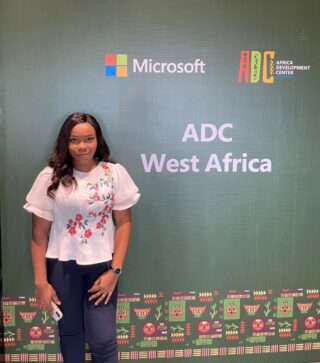 21-year-old Chisom Nwokwu is living her dream at Microsoft

Every weekday, 21-year-old Chisom Nwokwu starts her day at Microsoft by brewing a cup of coffee. She then chats briefly with her colleagues before walking over to her desk. Nwokwu begins to run through her emails to catch up on details from her previously recorded meetings. Then, she has a one-on-one with her manager, after which she becomes sure of every task for the day and begins tackling them with laser-like focus. She’s pretty confident. You can tell that she has been ready for this phase of her life long enough. “This has always been my dream,” she said.

As a child, Nwokwu grew up loving computers. “I was exposed to computers very early,” she said. “We weren’t so much of a well-to-do family, but my parents always ensured we were enlightened and had access to as much technology as they could afford.” As she grew older, so did her love for computers. She played games, learnt and explored on the desktop computer her father bought for the kids. It’s no surprise she started dreaming of working for the same company that made the ‘Windows’ on those computers. While she explored other hobbies such as ballet and public speaking, she had one dream – to work at Microsoft.

However, that dream looked like a wild fantasy, even to Nwokwu. “It was just a childhood dream. You know, the way people dreamt of becoming pilots and astronauts. Most people didn’t take it seriously. I didn’t even take it seriously myself. At that time, you hardly hear of Nigerians working in companies like Microsoft. But my parents believed me,” Nwokwu said.

While filling out her high school yearbook, she scribbled “computer programming” as her proposed career and “to work at Microsoft” as her ambition. “My friends saw it and said it was impossible because Microsoft is a ‘very big company’.”

When it was time for her to go to University, Nwokwu did not need to overthink her career options. “I just wanted a course that would keep me in front of my laptop,” she said. “So it was either computer science or computer engineering.” But her options were down to one when she realised that her choice university, the University of Nigeria, Nsukka, did not have a computer engineering program. She gained admission to study her desired course. That was just the beginning.

While at school, Nwokwu soon realised that the curriculum did not have enough to strengthen her skill set. “Most of the things they were teaching us were not practical,” she said. “I only started learning helpful courses in my third and final years. And it was only a few of them that really helped.” Nwokwu realised she had to roll up her sleeve to give herself a fighting chance. So she started exploring new ways to improve herself. Her first move was to look for a community that could aid her growth. Fortunately, her university had just created Lion Science Park – Nigeria’s first University-backed tech hub. She then started a self-taught foray into android development.

During the covid lockdowns in 2020, schooling became virtual, hence more flexible. Nwokwu had plenty of free time on her hands, so she decided it wasn’t too early to start applying for her first job. It was a bold move, seeing that it was the same year Nigeria’s unemployment rate jumped to an all-time high of 33 per cent. She started sending out applications to Nigerian companies, especially in Lagos, which houses the most startups in Africa. “Many of the companies I applied to asked me to show them the apps I built on Play Store. I didn’t have any, so I started spending more time developing my skills and built my first mobile app.”

However, her career took a different turn when she attended a virtual conference by Women Who Code. According to Nwokwu, the conference hosted speakers who were engineers at Google and Facebook. “These people were fresh graduates of UNILAG (University of Lagos),” she said. “One of them was already working at the Facebook office in Dublin, while the other was at Google, U.K. They spoke about how they started preparing while in school and landed these jobs as fresh graduates.”

That was when she realised it was okay to carry on with her dreams of working for the world’s biggest companies. She saw that it was possible and braced for the challenge.

Nwokwu immediately reached out to Teniola Sulaiman, one of the speakers, after the virtual conference, seeking directions on what steps to take. “She first asked to see my resume. That was when I realised my resume was crappy. It was long and had only one project. It was three pages of nothing,” she said with a giggle. She paused on sending job applications and decided to take her time to build a great résumé. By this time, it was August 2020.

She began to take courses to improve her résumé’s outlook. The goal was to have a one-page résumé that would impress an employer from an international organisation. So while taking courses on résumé improvement, she gained extra certifications and built more projects to fill it up. “Aside from my IT (Industrial Training), I didn’t have any experience. So I needed my projects to stand out for me.” She reached out to Teni, who had now become her mentor, to show her progress with her résumé. This time, Nwokwu got the nod. It was time to start applying.

Nwokwu no longer wanted to work for regular Nigerian companies. She had seen people like her work at tech corporations that previously looked impossible. So this time, she went all-in on the big guns. “I wrote down a list of 20 companies I wanted to apply to. The list had Google, Facebook, Amazon, Netflix, Tesla etc. I sent applications to all of them, and some reached out.”

But what she didn’t expect was for aptitudes to become her next challenge. “The tests were completely different from what I expected,” she said. “The questions were about data structures and algorithms. The topic wasn’t strange, but I wasn’t prepared for it. I flunked my first test. I did not even know what to write.” Nwokwu’s excitement dwindled as she closed the browser tab. She then reached out to Sulaiman, who told her that she needed to prepare for technical interviews. Again, Nwokwu stopped applying and started courses on “data structures and algorithms”, preparing for her next technical interview.

When she thought she was ready, she resumed applying for jobs. But she still kept failing those technical interviews. “Bloomberg was the first company I made considerable progress in their screening. I almost got to the final stage. At a point, I was already envisaging working for Bloomberg London. So when they told me they were no longer moving forward with me, I was frustrated. I had put in so much work, and I was tired.”

Two weeks later, a friend sent her a link showing that Bank of America was hiring interns. Nwokwu decided to pick herself back up and apply. Two weeks later, she got an invite for a screening interview. “I hope I don’t fail this one,” she thought. Then Microsoft, her dream company, reached out to her. “I didn’t believe they would get back to me,” she said. “I applied in August but didn’t get feedback until December. It encouraged me to get back to practising.”

Nwokwu took both tests in the same week and passed them. As a result, she started an internship with the Bank of America in Dublin while in her final year at school. Microsoft’s offer also came through before she completed her internship. Both offers came in less than five months from when she decided to play in the big leagues. And she didn’t have to choose. Now she is part of the team working to achieve Microsoft’s goal of becoming carbon-negative by 2030.

When I asked Nwokwu about her most notable career hack, she said it was “self-branding”. “I don’t stay hidden. I document my progress publicly, and I’d recommend it to anyone trying to build a career in tech. Some people even create blogs and YouTube channels to talk about their growth. It’s important to learn skills and build a portfolio, but people need to know you.”

However, working at Microsoft is only the beginning of Nwokwu’s ambition. In a few years, she wants to write fewer codes and lead teams of engineers. But right now, she is helping other Nigerian graduates position themselves to get jobs at international companies. “If I weren’t in tech, I’d be a life coach,” she said. “I enjoy helping people grow. Otherwise, I’d be a caterer because cooking is therapeutic for me.”