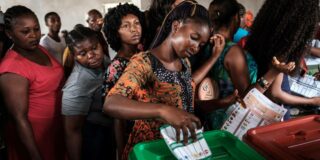 Come February 25, 2023, Nigerians would elect their 5th democratic president into government after 23 years of unbroken democratic dispensation. The election, according to sources, would be the most expensive election the country has held yet. The Independent National Electoral Commission (INEC) has earmarked N239 billion to conduct the general elections, a figure higher than N188.93 billion spent in 2019, N116.40 billion spent in 2015, and N139.19 billion spent in 2011.

As for the aspirants, Bismarck Rewane, a member of President Muhammadu Buhari’s (PMB) Economic Advisory Council, estimates the marginal cost of winning the presidential poll to be N6. 094 trillion. He added that the eventual president would recoup his electoral expenditures within two years at a juicy fair return on investment of N1.741 trillion. Whether or not this is outlandish, Nigeria is looking at its most expensive general election yet. At least we have seen how much some party forms cost.

However, as the electorate gets their PVCs and head to the polling units to cast their votes, it is crucial they discard tribal or religious sentiment and dwell on some economic indices that reflect our shameful reality as a country. In the end, the economy of a country is highly dependent on the kind of people its citizens vote into power. Below are economic indices Nigerians should consider before voting in the next general election.

According to Statisense, the best annual Gross Domestic Product (GDP) growth rate Nigeria recorded was 20 years ago during Olusegun Obasanjo’s administration at 15.3 per cent, majorly attributed to the private sector reforms in telecommunication. The best annual GDP growth rate from 2015 to date was 3.4 per cent, recorded in 2021. While other years rated woefully within the period in review, 2020 was exceptionally regressive with a –1.92 per cent, resulting from the pandemic.

The International Monetary Fund (IMF) has retained Nigeria’s 2022 economic growth projection at 3.4 per cent and has even downgraded the 2023 projection to 3.2 per cent. The future looks gloomy with this.

The situation is dire now, and everything but the air we breathe in Nigeria has its price aiming for the sky. Per the latest Consumer Price Index (CPI) report released for June 2022 by the National Bureau of Statistics (NBS), the inflation rate surged to 18.6 per cent compared to 17.71 per cent recorded in the previous month.

The inflationary pressures are in part driven by a host of factors, including dependence on imports, exchange rate pressure and the recent Russia – Ukraine invasion that has been a prime driver of food inflation in a country like ours that is reliant on importation of critical commodities.

As inflation rises and the naira continues to plunge against the dollar, the purchasing power of Nigerians becomes eroded. We are beginning to see how we pay so much for so little in recent times. Prices of commodities have doubled, and it could be worse.

Nigeria is Africa’s largest economy, biggest oil producer, and the most populous black nation, amongst many other things. Blessed with both natural and human resources, it is reasonable to believe that the country can boast a healthy economy and reasonable self-sufficiency. However, this is not the case.

Nigeria’s external debt is almost $40 billion. The supposed “Giant of Africa” is indebted to a cluster of countries and organisations, including China, France, Germany, Japan, IMF, AfDB, and India. Nigeria even owes its apex bank over N18trn. More worrying is that 96 per cent of the revenue generated in the country services our debt. Interestingly, the debt servicing only covers the interest on the loans. Nigeria’s debt problem is a rabbit hole.

Nigeria’s failing revenue is accompanied by a spending problem. Borrowed funds are used for the most insignificant of purposes, and litters of white elephant projects are common. It is critical to halt the dreadful economic trend because of its immediate and long-term consequences.

The 1970s till the early 80s are fondly remembered as the good old days for Nigerians. It was an era where undergraduates had job offers before leaving their universities, complete with a car (usually a brand new VW Beetle) and possibly an apartment. Sadly, the socio-economic condition and reality of that time are divergent from what we have now.

Now, graduates latch on to hope for a good job after graduation, regardless of their educational qualification. After the mandatory one-year service (NYSC) to the nation, many graduates remain unemployed or sometimes settle for jobs that are not commensurate with their level of expertise or specialisation.

A growing unemployed able-bodied youth generation is a ticking time bomb, as seen with the recent increase in insecurity, which we experience in the form of banditry, kidnapping and other related activities.

There is a nexus between a country’s standard of education and its development. Around the world, education is the bedrock of national development. Nigeria’s educational standard is deplorable in comparison to global standards.

The Nigerian educational system is riddled with issues ranging from inadequate funding to infrastructure deficiencies and other drawbacks. These issues, particularly the lack of funding, have resulted in a number of strike actions and protests that not only waste time but also, in some cases, take lives.

Using data to foreground the poor funding problem, Dataphyte revealed that, of the 2022 budget totalling N 17.13 trillion, a sum of N923.79 billion went to the education sector. This amounts to 5.4 per cent of the total budget approved by the National Assembly and falls short of UNESCO’s recommendation that developing countries allocate 15-20 per cent of their annual budget to public education. Inadequate funding results in poor remuneration and consequently, incessant strike actions.

Presently, Nigerian unions are protesting five months of strike in public universities initiated by the Academic Staff Union of Universities (ASUU) on February 14, 2022. This is the umpteenth time ASUU is embarking on such a strike action. A previous one in 2020 lasted nine months.

On the other hand, approximately 18.5 million Nigerian children do not have access to education. This is a disgraceful increase from the estimated 10.5 million last year. It is important to note that no country can achieve long-term economic development without significant investments in human capital or human training, which occurs through education.