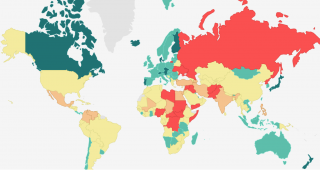 Global Peace Index 2016: These are the 10 most peaceful countries in Africa

The world’s leading measure of national peacefulness, the Global Peace Index, has released its report for 2016, in which it ranked 163 countries according to their levels of peace. Globally, the economic impact of violence is US$13.6 trillion, which is a staggering 13.3 percent of the total global economic activity in 2015-2016.

Since 2015, 81 countries have become more peaceful. Even as 79 more countries went in the other direction becoming less peaceful, or were struck by war, terrorism or conflict in the same period.

Regionally, the Middle East and North Africa (MENA) region, which was already ranked the lowest in the GPI, saw the biggest deterioration in its score in 2015, as the civil wars in Syria and Yemen deepened, and led to increased external intervention.

Although sub-Saharan Africa’s average score deteriorated slightly, it continues to rank ahead of Russia and Eurasia, South Asia, and the Middle East and North Africa.

The 10 most peaceful countries in Africa and their global score:

With the exception of Equatorial Guinea, all the aforementioned countries were classified as being in ‘high state of peace.’ Half of the most peaceful countries are in southern Africa, one may wonder if there is a regional advantage, for example, only two countries in North Africa made it into the top 100 of the 163 countries studied and their proximity to the troubled middle east.

Unfortunately, the threat posed by Islamist terrorist groups like Boko Haram and al Shabaab has continued to weigh on the score of many countries in the Sahel, East and West African region.

Stronger relations between neighbouring countries driven by efforts to bolster regional security and co-operation helped improve the score of countries such as Chad, Mauritania (gained 8 points) and Niger Republic.

Guinea and the Central African Republic (CAR) also saw their scores improve as political stability strengthened, following the holding of elections, although the CAR remains among the worst-performing countries in the region. Democratic transitions in some countries was good for their overall scores. Most notably, Nigeria experienced its first democratic transition following the presidential election, and this reflected in an improvement of its score on political instability. But its position at 149 is not good for an economy struggling to attract foreign direct investment needed to diversify its economy. Worthy of note is the recent violence in the Niger-Delta region which didn’t factor into the study. Only time will tell if Nigeria will lose gains made in the 2016 report next year.

South Africa was one of the top five countries to improve globally, though it still ranks a lowly 126th worldwide, driven by an improvement in the Political Terror Scale, as well as a reduction in arms trade and military spending.

Burkina Faso saw its score deteriorate too, as insecurity and crime levels deteriorated as a result of the turbulent political transition following the ousting of the country’s long-time president in late 2014.

After falling 42 places in the 2015 GPI, Djibouti’s rank has fallen a further 19 places in the 2016 index as social unrest and resentment against the government’s authoritarian rule continued to intensify in the run-up to the April 2016 presidential elections.

Burundi also performed poorly as the country slid towards civil war following the incumbent president’s controversial efforts to cling onto power by seeking a third term in office, which his opponents claimed was unconstitutional.

Côte d’Ivoire was one of the best performers in the 2015 GPI but fell back in the latest index as the fragile security situation in the sub-region was undermined by the March 2016 terrorist attack in Grand Bassam on an Ivorian seaside resort.

Of the 163 countries included in the study, 5 African countries (South Sudan, Democratic Republic of Congo, Libya, Sudan and Central African Republic) are in the bottom 10. Syria is still the least peaceful country in the world.

According to the study, each African, like the rest of the world lost US$1,876 last year due to global violence which is equivalent to losing US$5 per day per person.

Goal 16 of the 2030 Agenda for Sustainable Development, with 17 goals in total adopted by UN member states, officially came into force on January 1. Goal 16 focuses on promotion of peaceful societies, provision for access to justice for all and building accountable institutions at various levels.