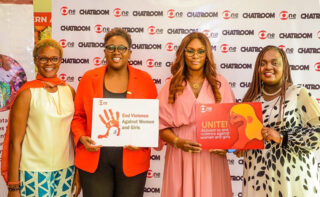 As part of its efforts to reduce cases of gender-based violence in Nigeria and in line with the goal of the 16 Days of Activism campaign, the Sterling One Foundation on November 30, 2022, hosted the movie screening of Chatroom, to highlight different forms of abuse women face, cultural traits that fuel them and ways victims can get help.

The Chatroom tells a story of gender-based violence against women, an issue most African societies talk about in hushed tones. It portrays the themes of solidarity, resilience, survival, kindness, hope and justice.

The screening which was held at Ebonylife Cinemas also featured an interactive session which gave viewers the opportunity to share their thoughts on what could be done to reduce violence against women and girls, drawing insights from their various communities.

Annually, the United Nations marks the 16 Days of Activism against Gender-Based Violence campaign which kicks off on November 25 and runs until December 10, as its way of getting more people to play a role in ending the abuse of women in all its forms. The campaign which was formally recognised in 1999 focuses on creating public awareness and influencing policy that protects the rights of women and challenges discriminatory behaviours across communities.

Speaking on the importance of the campaign and the screening, Mrs Olapeju Ibekwe, CEO of the Sterling One Foundation mentioned the importance of awareness, as many women and girls don’t even know they have been abused given how commonplace certain abusive attitudes have become.

“As an organisation where gender empowerment is one of our thematic areas, we consider it crucial to help more women understand their rights better and know when they are being trampled upon. For us, awareness is the foundation of the work, as it empowers more women to take action, speak up and break cycles of abuse,” she Peju. “This is not just a movie. It is a movement. So that more women, girls and boys can be protected.”

The First Lady of Ogun State, Mrs Bamidele Abiodun who was the special guest of honour also spoke on the incidence of sexual and gender-based violence in our society and why we need to change our approach towards dealing with the issue of violent behaviour.

“In Ogun State, where I am First Lady and several other states, we have the Sexual Assault Referral Centre, the Family Support Unit, and other shelters for women, but I have to say it is not enough. We need an end-to-end solution for survivors; a comprehensive program that not only addresses their physical and mental health but provides an economic safety net for as long as they require it.”

The Executive Director of Women in Management, Business and Public Service (WIMBIZ), Ms Hansatu Adegbite, who co-hosted the event commended the leadership of the Sterling One Foundation for inspiring and empowering women leveraging entertainment. She noted that this aligns with the essence of WIMBIZ which is about inspiring and empowering women. She added that this year’s theme was critical calling on all women to unite to stop the violence against not just girls but boys in our various homes and communities.

Reacting to the story portrayed in the movie, most of the viewers stressed the need for more leaders, family members, and even peers to hold themselves more accountable for what happens within their communities. Highlighting the role the culture of silence plays, they stated that victims can only speak up when they know that someone will act and justice will be served.

As part of its efforts, the Sterling One Foundation is working with partners to continue the advocacy for a reduction in gender-based violence and support for survivors via helplines where victims can break their silence, speak with counsellors and get help to overcome their trauma.