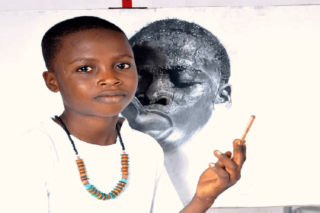 Kareem Olamilekan Waris shot to international fame in July 2018 after he drew a portrait of French President Emmanuel Macron in two hours, during Macron’s visit to the New Africa Shrine in Lagos, Nigeria. He was only 11 at the time. Today, he is 14, widely acclaimed and among the top hyperrealism artists recognized in Nigeria.

Kareem’s passion is palpable when he talks about his love for art, something he happened upon at six years old. He’d seen the drawing of a classmate and decided to recreate it. “One day, when I was little, I saw a classmate drawing and I got inspired. I drew the same character he did and started practising to get better,” Kareem told Ventures Africa. It was a drawing of Vision, a superhero cartoon character from the Indomitables, Nigeria’s first superhero-based endless runner mobile game.

But how does one go from drawing comics to creating social-themed hyper-realistic portraits? Again, it is a case of happenstance and emulation. Nine-year-old Kareem saw a hyper-realistic drawing made by his art teacher and fell in love with the tiny intricacies and vivid three-dimensionality. Given his genius, he had no problem learning how to draw hyper-realistic art by watching and copying his teacher. “I saw my boss’s (hyper-realistic) paintings, fell in love with them, and decided to copy them,” he said. Soon after, his own drawing caught the attention of Wole Adedeji, one of the founders of Ayowole Academy of Arts, the art school Kareem enrolled in to better his craft. Impressed by his work, the school gave him a scholarship.

Kareem’s talent has also afforded him other opportunities like receiving Taiwan’s Chou Ta-Kuan Cultural and Educational Foundation’s Global Award in 2019. The young prodigy is also an ambassador for Ecobank Nigeria. Then there’s the social currency of having over 150,000 followers on Instagram, which serves as Kareem’s online gallery. Besides posting his art online for his community of followers, Kareem has three exhibitions under his belt. The first took place in Lagos two years ago where he unveiled Our Daily Bread, a piece he often describes as his best work.

His next exhibition was in Taiwan where he surpassed over 2,000 nominees to win the 22nd Fervent Global Love of Lives Awards. His last exhibition was held in October 2020, alongside other students of the Ayowole Academy of arts. And he is optimistic about having another exhibition later this year. Kareem’s first artwork to be acquired was Focus. A painting he sold for N80,000 in 2018. He says the cost of his art is largely influenced by the size and the amount of work that goes into it. His latest piece, Political Compliance, is a three by four feet painting that took six months to complete. When asked how much it would sell for, his mentor and benefactor, Adedeji, puts it at N3 million.

Kareem’s art often depicts his experiences and those of people around him. From Our Daily Bread to Focus, to Political Compliance, his themes are often socio-cultural and political. His ongoing piece, Pressure, reference the challenges that children his age experience at home and in school. “I am currently doing a piece on pressure. Pressure parents put their children under, especially when a child desires a path different from their own. For example, if a child wants to be an artist, but the parents want him or her to be a doctor, lawyer, etcetera. And in school, children undergo a lot of pressure from their teachers,” Kareem explained.

The 14-year-old has an enviable work ethic, juggling both traditional school and art school. “I go to school Monday to Friday. I come to the studio after school if I don’t have chores or assignments. I’m often here (the studio) on weekends. And I come in every day when my school is on holiday,” he said. Kareem’s earnings from art is used to fund his education and support his family. His advice to children interested in art is for them to stay focused, dedicated, patient and hardworking. “Art is interesting. Drawing and painting is fun. Any child interested in drawing and painting should be focused, have patience, be dedicated and hardworking.”