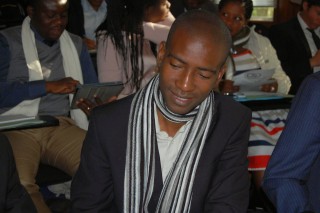 Climate Saviours: Sani Ayouba Abdou is all about change with a voice

A climate change affects all the continent’s development sectors and enormously reduces the development efforts. Agriculture and livestock considered as the main economic activities of the continent are heavily affected. The question becomes more a problem of survival than a development issue. Africa needs strong agreement and not argument here in Paris. – Sani Ayouba

Participants at the COP21 now expect a final deal tomorrow, December 13, as opposed to today when the summit was initially billed to end. A 27-page draft of the deal is however available which stipulates that temperature rises must be kept “well below 2C above pre-industrial levels and to pursue efforts to limit the temperature increase to 1.5C”.  According to Laurent Fabius, French Foreign Minister and COP21 Chairman, “things are moving in the right direction”. The signed deal will become effective in 2020

Despite the laudable progress witnessed so far, certain issues are yet to be met with a resolution. Top on the list is what negotiators have termed “differentiation”, and it involves climate finance and the demarcation between developing nations and developed ones.

The anticipation for a mutually beneficial and sustainable agreement has never been higher. As the final stages of negotiations steadily approach, Africa is still not out of the clear, and now is the most crucial of times to band together, speak with a united voice, and not settle for anything less than is attainable.

As the world has come to agree, the job of fighting of change is not that of representatives and negotiators in Paris alone. Individuals from different walks of life have lent their voices to advocate for the salvation of the planet throughout the talks.

Sani Ayouba Abdou is one of these distinguished set of “climate saviours”. Since 2009, he has devoted his energy to Jeunes Volontaires pour l’Environnement (JVE) [Young Volunteers for the Environment], an NGO that encourages youth involvement in environmental issues. He talks to rural communities in Niger to raise awareness on environment issues and sustainable development. He holds a Master’s degree in Project Management and has already been active in his community for a number of years. He was a leader in the Nigerien scouting movement from a young age.

“People used to say that Africa is one of the most vulnerable continents to climate change. This situation is increased by its poor state of economic development and low adaptive capacity as well as extreme poverty,” Sani told Ventures.  “Also, the absence or weakness of modern technologies in all sectors frequent natural disasters such as droughts and floods, and heavy dependence of agriculture on rainfall further increases the continent vulnerability. In analyzing the situation, it was established that the continent is not responsible for climate change but unjustly suffered the consequences of this phenomenon.”

Sani is very engaged in climate change and renewable energy movement. He is strongly involved in the Beyond 2015 agenda (the transition of the MDGs to the SDGs), and the UN Negotiation on Climate Change (COP21). Sani is a 2014 YALI Mandela Washington Fellow and attended a six-week Civic Leadership institute at the University of California at Berkeley.

The Mandela fellowship honed his skills and reaffirmed his advocacy for the promotion of sustainable development by including youth and women. He was re-elected as Observer for Africa CSO to the World Bank Climate Investment Fund in Washington DC.

According to him, the 21st UN Conference is an opportunity for Africa to demand climate justice for the benefit of its population and its strategic orientation towards development.

“Africa must develop and climate change unfairly slows this drive,” he told us.  “For us as a young [population], this is our future and the future of Africa. This is why by participating in the 11th Conference of Youth Africans, we expressed our desire to be associated  [with], and for an effective participation in all initiatives in the fight against climate change on the continent. Young people contribute to promote solutions for sustainable development through the education and behavior change to affirm their eco citizenship.”

For Sani fighting climate change is about balancing the need to adapt to the change that will most certainly come while also working towards mitigation of further effects. This requires a financial commitment that  is respected and clearly explained in addition to technology transfer that can help in both adaptation and mitigation.

Sani is urging African leaders to stay united and strong in Paris climate talks in the interest of the continent: “As young activist that work directly with communities, we are here in Paris to advocate and push for a strong agreement and not arguments. We hear more arguments and now it’s time for action, for a commitment and leadership that saves our planet in the benefice of humanity.”