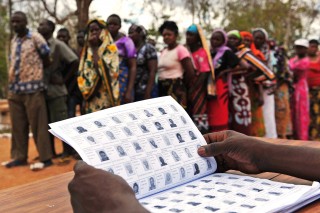 Highlights of presidential elections in Africa in 2015

Togo’s general elections were held on the 25th of April with Faure Gnassingbe emerging as the winner, granting him a third term in office. Late last year, thousands of Togolese protesters stormed Lome, the country’s capital city, to call for a bill that limits presidents to two terms in office. This was done in a bid to stop Gnassingbe from contesting again this year but, to their dismay,  the bill was unable to pass through the legislature and did not become law. Gnassingbe, whose father holds the record for the longest serving ruler in Africa, ruling Togo between 1967 and 2005, joins the list of African presidents who served a third term in office.

However, Gnassingbe had to tackle the challenges put forth by his main rival Jean-Pierre Fabre, who came second with 35 percent of the votes to his own 59 percent. Fabre rejected the result of the election, calling it fraudulent due to the fact that the numbers didn’t tally with those calculated by his party. Togo has a history of election violence — the most recent occurring after the 2005 elections where hundreds of people lost their lives — but, this year’s election was relatively peaceful. Though there were street protests by opposition supporters before and after the elections, people protested peacefully, leaving none dead or injured. This shows significant growth and development in psyche of the people with regards to democracy, indicating that they can solve problems without resulting to violence.

During the unfortunate circumstances surrounding Guinea where more than 2,500 lost their lives to the Ebola epidemic, the people needed an event to take their attention away from the outbreak and it came in the form of its general elections. Guinea’s presidential elections were held this year on the 11th of October across the country. While, officially, there were 8 people vying for the position, only 3 of them had any real prospects of winning and, eventually, one of them became the president. That person was Alpha Conde. He was elected for a second term in office, gaining over 58 percent of the votes in total while his closest rival, Cellou Dalein Diallo (a former prime minister), had 31 percent. The opposition candidates, headed by Mr. Diallo, came out with different allegations during and after the elections, some of them implicating Guinea’s electoral commission (CENI) and the government, indirectly. However, these allegations never went to court, instead, the perpetrators attempted to incite violence by calling for protests and suggesting that the people fight on the opposition’s behalf.
These protests resulted in deaths, with an Amnesty report stating that 13 people died in violent clashes between Conde’s supporters and Diallo’s supporters in the weeks before and after the election. Similarly, in the fiercely contested 2010 version of this election, a person died while many were wounded as a result of fighting between the same group of supporters.

In 2010, when former president of the Ivory Coast, Laurent Gbagbo, refused to cede power to the current president, Allasane Ouattara, after losing at the elections to him, this led to months of violence and cost thousands of people their lives. The election held in the country this year is the first since that fateful exercise in 2010 and Gbagbo is currently in the custody of the International Criminal Court.
Allasane Ouattara won this year’s election, granting him a second term in office. He won by almost 84 percent of all the votes cast and his closest rival, Pascal Affi N’Guessan, had about 9 percent of  the total votes. However, Ouattara was accused of trying to do what his predecessor did, that is, holding on to power by any means necessary. The election was relatively peaceful, with the president of the electoral commission clearly ecstatic that the country has been able to move past the tragedy that occurred in 2010, successfully.

Burundi, rising from the ashes of a 13-year civil war that ended in 2005, was thrown back into crisis again this year. Pierre Nkurunziza, who has been president since the civil war ended in 2005, refused to step down from contesting for a third term in office. His third term ambitions violated the Arusha accords set after the civil war that calls for rotation of power between long-time rival ethnic groups, the Hutus and Tutsis. The election, which was held in July, saw a boycott from some of the opposition candidates. The election process in the country was marred by violence, which still continues, with hundreds of people dead while thousands more have left the country. After a voters turnout of 73.44 percent, Nkurunziza garnered 69.41 percent of the total votes, winning the election by a wide margin. He was sworn in August 2015, earlier than the proposed date, his victory tainted with the blood of his people.

The death of its former president, Michael Sata, last year, created a vacuum that Zambia needed to fill. Its presidential elections were held in January this year and eleven candidates contested for the presidential seat. The frontrunners were Edward Lungu of the ruling party, the Patriotic Front (PF) and Hakainde Hichilema representing the Union Party of National Development (UPND). Voter-turnout was very low, 32.4 percent, due to the fact that voters appeared to be extremely tired. They were tired because there have been twenty-three by-elections in Zambia in the past three years and it was becoming a burden for them to go out to vote. The election was tight between the top two candidates and Edward Lungu won with about 48 percent of total votes cast, while Hichilema came second with almost 47 percent of the votes. A bit of violence ensued after, mainly between the supporters of PF and UPND, but no deaths were reported. The official general elections will hold in Zambia next year.

Africa’s longest serving ruling party and Tanzania’s dominant party, the Chama Cha Mapinduzi (CCM) won in the presidential elections carried out this year. The CCM has succeeded in producing presidents of the country for the past 54 years. Its representative at this year’s elections, John Magufuli, was the former Minister of Works for Tanzania. This year,the opposition parties came together to form a coalition group, the Chama Cha Demokrasia na Maendeleo (CHADEMA), that was expected to put up a fight against the CCM. Elections in previous years were characterized by low voter turnout due to the level of the opposition parties, however, this time they came out because of the predicted strength of the opposition coalition. There was no violence in all the polling units and the CCM’s torchbearer Edward Lowassa garnered 39.97 percent of total votes. Still, that was not enough as John Magufuli, nicknamed “the bulldozer”, scored 58.46 percent of the votes. Though Lowassa disagreed with the election result, he eventually conceded defeat like many of his peers all over Africa and John Magufuli was sworn in as president in November. Looking forward, things have been projected to not be easy for the CCM as they have been compared to a “truck going downhill with failing brakes.”

After former President Blaise Compaore was ousted last year by his people after he attempted to contest for a third term, an interim Government was instituted. A temporary coup this year also disrupted things in this West African nation, although the instigator came out later to apologise and agree that his actions were wrong. This presidential election marked the first time Compaore’s name did not appear on the ballot papers. the elections finally took place on the 29th of November, with a 60 percent voter turnout. Frontrunners in the elections included Roch Marc Christian Kabore of the People’s Movement for Progress (MPP) and Zephirin Diabre for the Union for Progress and Reform. Kabore won with 53.49 percent of total votes, amidst no reports of violence at polling units. Burkina Faso might just be on its way to a glorious future, one actualised by former leader, Thomas Sankara.

Violence and killings between rival militant groups in this former French colony caused elections to be postponed until the 27th of December this year, from its original date which was meant to be the 18th October 2015. Violence has been going on for two years now in this central African country, between two rival militant groups; the Seleka and the anti-Balaka. Thousands of people have died while many of its citizens have been displaced as a result of the attacks. Former President Francois Bozzie, who has the support of the anti-Balaka, has been barred from contesting in the presidential election. This decision resulted in another spate of violence, despite the Pope visiting the country and his calls for peace. About 30 candidates are set to contest in the elections later this year, while millions of people have registered to vote. Hopefully, the new leader can stop the bloodshed.

This tiny country, consisting of about 115 islands off the coast of Africa, has about 95,000 citizens and its president, James Michel, contested for a third term this year. He ran against five other candidates and expressed confidence that he was going to win. However, none of the candidates, including President James, had up to 50 percent of the votes in the elections that occurred on the 4th, 5th and 6th of December. The election was described as “peaceful” and “transparent” by international observers and runoff elections have been fixed for the 16th of December.

There was a surprise win in Nigeria’s presidential elections this year as the ruling party for the past 16 years, the Peoples Democratic Party (PDP), lost to the All Progressives Congress (APC). Goodluck Jonathan of the PDP, the incumbent president, lost to his main opposition, Muhammadu Buhari, who is a former military ruler of Nigeria himself. The election was originally slated for February but was postponed till March due to logistics issues and the Boko Haram threat. Voter turnout was lower this year, a percent abysmal 43.65 percent, compared to the turnout in 2011. Buhari won with 53.96% of the votes, ending the longest run by a political party in power in Nigeria. There were reports of violence and deaths during the election, an indicator that the country has been unable to end its culture of violence during elections.

Omar Al-Bashir won the mandate to be president of Sudan for another five years, having been so for the last 25 years. The 71-year old president contested with 14 other relatively unknown rivals in a presidential election that experienced a low turnout of 46.4 percent. In an overwhelming win, he garnered 94.05 percent of the votes. The international community claimed it would be “business as usual” because of the arrests and harassment that preceded the elections. Al-Bashir has continued to be the leader of this country amidst criticisms both home and abroad. He has also been indicted by the International Criminal Court, a trial which he has been fleeing from.