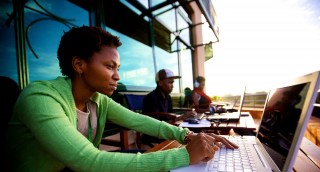 Innovators across Africa are harnessing digital technology to develop new ways of tackling social and economic challenges. From the rise of Silicon Savannah to the launch of M-PESA, the continent has a burgeoning tech sector that is driving a social tech movement that puts people before profits. These inspirational projects are making a positive difference to people’s lives in their own communities and creating social change at a national level.

For the last four years, Nominet Trust has identified and celebrated 100 different socially-motivated startups from across the globe. In our 2016 NT100, we feature some extraordinary examples of how pioneers from across Africa are using tech for good to promote education equality, economic empowerment and access to medical care.

In Kenya, a lack of physical space at universities and the prohibitive costs of attending can be barriers to often capable students pursuing degree programmes. Daystar University in Nairobi and California startup, OneUni, partnered up to tackle this and make university education accessible to more Kenyans. Together they created Africa’s first smartphone degree programme, Daystar Mobile, where all course materials are made available through an app. They now have plans to expand the model to other African countries to reach thousands of more students, aiming to make university education more accessible across the continent.

Another venture bolstering education in Kenya is Tunapanda Institute. Approximately one-third of Kenyan children do not enrol into a high school because of financial constraints, so brothers Jay and Mick Larson created a free, open source online training programme to help bridge this digital divide. Tunapanda Institute currently delivers three-month intensive learning courses in technology, design and business, giving students access to vital skills that can act as an alternative to traditional high school diplomas. At the institute’s HQ in Nairobi, specific workshops are also held to provide girls with skills in the STEM subjects, helping address the gender gap in these fields. To date, 100 people have graduated from the programme, of whom 85 percent are in meaningful employment as a result.

After the disputed elections in Kenya in 2007, over 800 people were killed, leaving a generation of youths feeling disenfranchised. To help get to the heart of what young Kenyan’s wanted to talk about, Rob Burnet established Well Told Story, a research consultancy which is famous for creating Shujaaz, meaning ‘heroes’ in Sheng. Shujaaz is a free, international Emmy-winning comic book that now has a monthly circulation of 500,000 and a readership that Burnet estimates to be five million Kenyans aged between 10 and 25. The content is lovingly crafted by young people based in Well Told Story’s Nairobi office and offers readers tips on everything from planting maize to contraception, information about upcoming elections and careers.

In Cape Town, communities living in deprived areas are threatened by the devastation caused by house fires which can sweep through the neighbourhood. Lumkani, which means ‘beware’ in Xhosa, was created by a group of students horrified by the danger faced by less advantaged citizens in their city, to help save lives in the event of these fires. Lumkani transmits a signal to devices within a 20-metre radius so that neighbours are aware of potential danger and can mobilise help or evacuate. Since launching in 2014, Lumkani has been installed in 7,000 homes in Cape Town, and co-founders Francois Petousis and Samuel Ginsburg say that the device has already prevented the spread of what could have been five major fires.

Although 70 percent of Nairobi’s population rely on the matatus – 20,000 private vans which transport people around the capital – there’s very little information available on how to navigate this seemingly chaotic system. In 2011, researchers at MIT, Columbia University and the University of Nairobi, together with design agency Upshot, began a collaborative mapping project to make sense of the matatus system to support those travelling on it. By recruiting Kenyan students to ride the matatus and log journeys using mobile and GPS, by 2015 Digital Matatus had recorded almost 3,000 stops on more than 130 routes. Since its release, the city of Nairobi has adopted the map as the capital’s official transit guide and more than 5,000 people have downloaded it online.

Childhood friends Brian Bett and Taita Ng’etich, whose families are farmers, set out to explore better solutions to farming after their young tomato crop was destroyed by flooding. They developed a system using low-cost materials and advanced sensor technologies to monitor their crops to prevent this happening again. When neighbours started asking them to build their own greenhouses, they founded a new business: Illuminum Greenhouses. Each greenhouse is fitted with sensors that monitor temperature, humidity and soil moisture, alerting farmers to change the settings via text messages. To date, more than 750 Kenyan farmers are using Illuminum’s technology and the pair aspires to scale the innovation so it can be deployed all over Africa and Latin America.

Around 200 million pastoralists in Africa seek pasture for their herds using a combination of word of mouth, scouts and knowledge of local terrains – but this has become increasingly challenging due to climate change and drought. To modernise pastoralists’ search for land, Chris Bessenecker from Project Concern International (PCI) developed project SAPARM (Satellite-Assisted Pastoral Resource Management) in partnership with USAID and the World Food Programme. Through SAPARM, PCI can share maps featuring satellite images of vegetation cover with pastoral clan leaders every 10 days. Since SAPARM’s launch in 2013, over 80 percent of participating pastoralists use the maps, and more than half have said that it’s their most important source of information.

In 2016, South Africa’s unemployment rate hit a 12-year high. Shafin Anwarsha believed the main challenge was a lack of access for jobseekers who often live in segregated townships with poor transport and limited internet access, so he developed a recruitment app called Giraffe. Giraffe aims to reduce unemployment by providing a free resource which helps employers hire medium-skilled workers faster and more easily. Since its launch in early 2015, Giraffe has attracted over 150,000 jobseekers, invited over 30,000 of them for interviews, and helped hundreds of businesses recruit workers faster and cheaper than ever before.

While volunteering in Swaziland, Dr William Mapham would often drive eight hours to diagnose patients, who would then have to endure the same journey to receive treatment. This inspired Dr Mapham to create Vula — a name derived from the siSwati phrase for ‘open your eyes’. The app enables health workers to capture basic patient and eye health information using a smartphone camera and securely share it with a specialist thousands of miles away to gain an expert opinion. Dr Mapham and his team are currently focused on increasing the app’s reach in Swaziland, before extending it to Zambia.

According to UNAIDS, 15 percent of women and 5 percent of men aged 15–25 in South Africa are infected with HIV. While medical treatment has been improving, little has been done to support patients’ mental health. Project Khuluma was set up by international NGO, SHM Foundation, to help teenagers facing HIV by providing around-the-clock support through a smartphone. Project Khuluma uses mobile group chats to create a safe environment for young people to discuss anything from their HIV medication to sex, relationships and social issues. The young people have the option to remain anonymous and each group is supervised by a trained facilitator, who can identify teenagers showing signs of depression, mental illness, or resistance to their antiretroviral treatments.

All these inspiring ventures, and others Nominet Trust profiles in our NT100, demonstrate how digital technology can bring ideas to life and make a huge difference to people’s lives, whether it’s accessing education, improving healthcare provision or connecting jobseekers with employers. We hope that these projects will inspire more entrepreneurs in Africa to apply their technical skills to the social challenges facing their own communities.