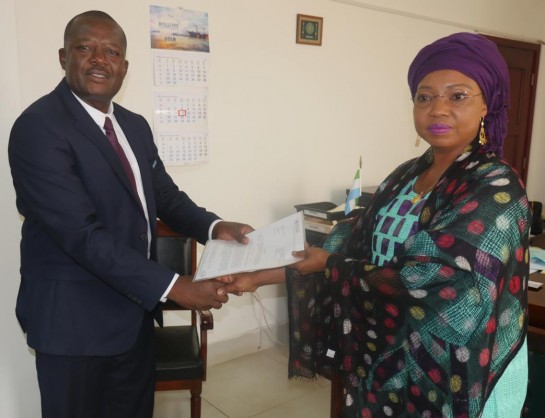 The newly appointed Representative of the World Health Organization Country Office in Sierra Leone, Mr Evans Majani Liyosi, today 15 May 2019 presented his credentials to the Acting Minister of Foreign Affairs and International Cooperation, Hon Nimatulai Bah Chang , in Freetown. This engagement now gives Mr Liyosi the official recognition by the government to represent the Organization in Sierra Leone.

Mr Liyosi is from Kenya and was formerly the acting WHO Representative in the Republic of South Sudan. He is bringing to his new post more than 20 years of experience in public health management and leadership and high technical expertise in the control of communicable disease. He has worked on health emergencies, surveillance, reproductive health and other strategic public health areas and has worked with WHO for more than 10 years at different managerial and technical levels in several countries. He also has a good experience working in the government and NGO sectors.

Formally receiving Mr Liyosi in his new capacity on behalf of the government of Sierra Leone, Hon Chang expressed appreciation to the World Health Organization for the continued support to the country’s health systems and reaffirms the government’s commitment in providing the conducive environment to carry out its mandates. “Sierra Leone has always been a home for previous WHO Representatives and I hope you will also enjoy the same relationship like your predecessor”, she added

Mr Liyosi takes over as WHO Representative from Mr Alexander Chimbaru, who served as the Officer In Charge of the Sierra Leone Country Office since June 2017. Mr Liyosi’s initial official activities have included high level engagements with national authorities, donors, health sector development partners and the civil society

Distributed by APO Group on behalf of WHO Regional Office for Africa.