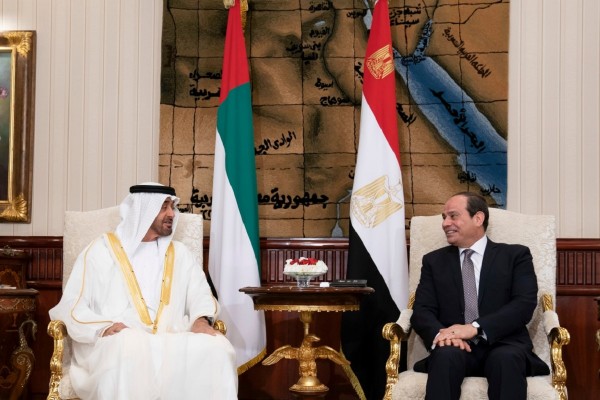 His Highness Sheikh Mohamed bin Zayed Al Nahyan, Crown Prince of Abu Dhabi and Deputy Supreme Commander of the UAE Armed Forces, has re-affirmed the UAE's determination to ensure uninterrupted global oil supplies and the safety of maritime navigation, while sparing no effort to stand up to any menacing threats by any party “whosoever” to the global economy.

“The myriad challenges besetting the region entails an efficient pan-Arab re-action that protects the supreme interests of Arab nations and helps achieve their peoples' ambitions for security, stability and peace,” His Highness Sheikh Mohamed said, underlining the country's keenness to continue consultations and exchange of views with the Arab Republic of Egypt over the latest regional and international developments.

The Abu Dhabi Crown Prince, who arrived in Cairo earlier today, made the statements during his meeting with Egyptian President Abdel Fatah el-Sisi, who re-affirmed his country's solidarity with the UAE and Saudi Arabia against all attempts to undermine their security and stability.

“Targeting tankers and oil facilities is a grave development that poses a significant menacing threat to the entire world, not to the affected countries only,” Sheikh Mohamed added, expressing his appreciation of the supportive stance adopted by Egypt toward UAE and Saudi Arabia in this regard.

His Highness Sheikh Mohamed bin Zayed Al Nahyan, Crown Prince of Abu Dhabi and Deputy Supreme Commander of the UAE Armed Forces, during his meeting with the Egyptian President, underscored the pivotal role played by Egypt as a major Arab power that enjoys a significant clout on the regional and world stage.

“The UAE is always keen to exchange views with the Egyptian leadership about the sources of threats to regional security, including the recent terrorist and sabotage acts that targeted commercial vessels off the UAE waters and Saudi oil facilities over the past few days,” Sheikh Mohamed added.

“The UAE-Egyptian relations are a robust tenet for regional security and stability, as the two countries are working together to counter terrorism and extremism and to stand up to any attempts to meddle into the internal affairs of Arab countries. We both endeavor to protect our states against the malicious agendas of armed militias in a way that supports the development of Arab countries and their peoples' rights to a decent life away from conflicts and destructive disputes,” Sheikh Mohamed continued to say.

For his part, the Egyptian president reiterated his condemnation of the sabotage acts against four commercial vessels off the UAE waters and the oil facilities in Saudi Arabia, decrying the two developments as a menacing threat to regional and international security.

The two leaders reaffirmed their solidarity with Saudi Arabia against all attempts to undermine its security and stability, with the Egyptian president accentuating that the stability of the Gulf region is an integral part of Egypt's national security.

They doubled on the importance of maintaining the highest level of coordination to confront the besetting challenges and counter all threats to Arab security and stability.