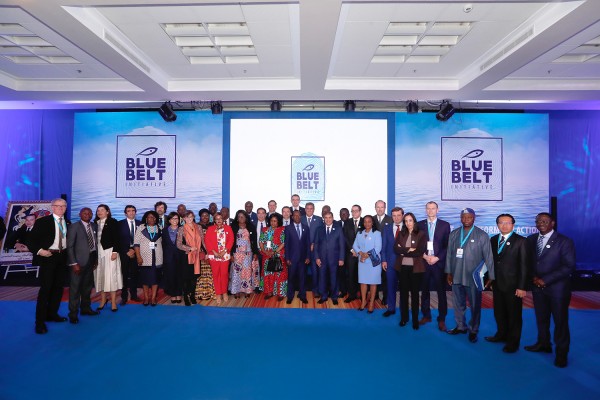 Organized in Agadir, the meeting welcomed representatives from 22 countries, including important African delegations; Launched in 2016 by Morocco, the Blue Belt Initiative (http://LaCeintureBleue.org/en/) provides a unifying framework for building a sustainable and prosperous fisheries economy; All representatives participated in the formulation of the Agadir Declaration that is reminding the necessity to organise a fishing and an aquaculture that are innovative and protective for the oceans

During the conference on the Blue Belt Initiative, that was organised on February 19th, all the African continent had a rendez-vous in Agadir ! Held on the sidelines of the fifth edition of Halieutis, this conference welcomed representatives from 22 countries, including 17 ministers. The meeting was able to bring together a large number of African delegations, representatives of countries such as Norway, Spain and the Russian Federation, as well as international experts and members of FAO.

As a reminder, the Blue Belt Initiative was launched in 2016 by Morocco, on the sidelines of the COP 22 held in Marrakech. This initiative is a platform for the sustainability of fisheries and aquaculture in Africa. It is part of the agenda of the United Nations Conference on Climate Change, as well as providing a unifying framework for the emergence of a low carbon and low ecological footprint on the ecosystems.

On this occasion, Mr. Aziz Akhannouch, Minister of Agriculture, Maritime Fisheries, Rural Development and Water and Forests of the Kingdom of Morocco, highlighted the great potential that Africa had. This continent, which will be responsible for the growth of half of the population in the next thirty years, contributes now only 7% on the global fish production and only 3% on international fishing products.

At the end of the conference, the parties presented the Blue Belt Initiative Declaration. This statement, echoed by all representatives, reaffirmed the strategic role of the ocean economy and of aquaculture in Africa in terms of food, economic growth, jobs and innovation. The declaration also raised the challenge posed by climate change, but also its threats to the balance of coastal and marine ecosystems and its impacts on fisheries and aquaculture, that are sources of employment and food security for millions of people on the continent.

The Agadir Declaration also called for investing in the blue economy, and more specifically in  sustainable, innovative and protective fisheries and aquaculture, by facilitating technological and social innovation, the exchange of good practices and the promotion of sustainable development. social entrepreneurship. Such an investment will increase socio-economic and environmental benefits that will, among other things, create jobs, youth training, food security, eradicate poverty, preserve marine ecosystems and adapt to climate change.